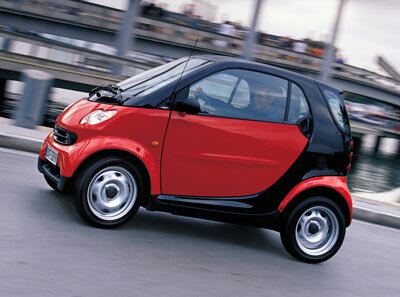 Perhaps you’ll forgive me for jumping on the (mini) bandwagon. And sure, it might sound ludicrous for a grown man to even consider driving something that seems more suitable as a toy for children ages 8-12. But if there is any one thing that would serve as a good indicator of our present and imminent future, it appears to be the Smart car produced by Daimler-Chrysler.

In considering the topic of “What’s Next?,” we would be remiss if we did not consider our current trends and how they compel us toward the future. It is no surprise–though some might still debate–when I say that global warming and other environmental factors have relegated us to our present desperation. With gas prices that could only be considered “grand theft oil” and a rapidly expiring supply of crops, seafood, and other items irreplaceable, it is no wonder that our economy is spread so thin. As a result, every sensible person is considering going “green” in order to save their other hard-earned green.

So, of all things, why the Smart car? First, just to set the record straight, I am not arguing that everybody a year from now will trade in their Mercedes and BMWs for one of these. (I would suppose it’d be a different story if they all had Hummers, though). But if we looked at the Smart car as a symbol, rather a bookmark of this generation, then we will see that every person is interminably linked in some way or another to the elements of this car.

What defined the generations a century earlier was the Ford model T. With the explosion of this automobile came a movement towards industrialization, a marker of a new revolution. It was a telling symbol of societal status at the time; it was an object that was rare, loud, expensive, and elegant. The people of the time looked at that car careening down the road and were convinced that surely a new era in the United States (and the world) had arrived.

And now? Almost a hundred years later, it still somehow circles back to that motor with four wheels, albeit a different machine altogether with appeal for different reasons. It is a symbol of our current generation and its relevant issues, and possibly so for many more years to come. The Smart is economically conscientious (around $12,000), convenient (helpful for parking, being no greater than 250CM in length), enviro-friendly, technologically advanced, and simply fun.

That means that almost every person roaming through the Internet next year will somehow be linked to this car, one way or another. Whether it is directly by searching for their next car, or indirectly by looking for the latest developments in technology, or analyzing trends in our current ecosystems and economical landscape, the Smart would have told us all–simply and matter-of-fact.

Now, if it only told us how to pick up women. But alas, a car can only do so much.