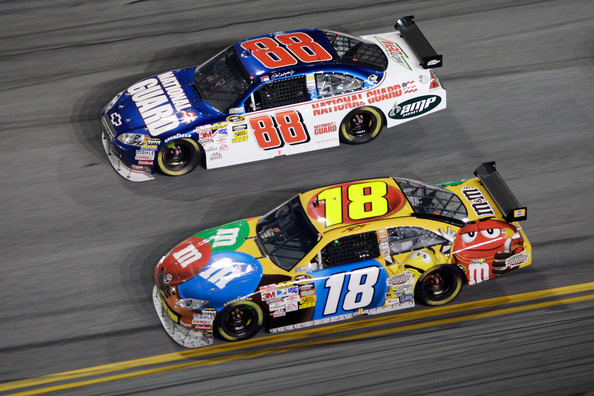 Jeff Gordon, who pilots the 24 Dupont Chevrolet, won his 77th race Sunday, passing Dale Earnhardt by 1 in total wins. The crowd went wild, but not in a very nice way. Hundreds of fans thew beer, water bottles, and even toilet paper onto the track as Jeff Gordon performed his burnout. On the cool down lap, Dale Jr. stayed on Jeff’s outside as crazy amounts of trash were hurled over the fence from the grandstands onto the track.

Seriously, just how dangerous is it to be on the receiving end of beer cans on the track? The short answer is probably not much. You’ve got sheet metal over your head, and a windshield that won’t break. I’m guessing that the fans in the stands are much more likely to be injured by thrown cans of beer and other debris than the drivers are. In all this confusion, I really worry about the fans more than anyone else.

Think about it. If you’ve ever been to an actual Cup race. The fences are high along the wall. They are high for a purpose, which is actually two-fold. First of all the high fences are to keep sheet metal, tires, and other dangerous things from bouncing off of you when a crash happens right in front of you. Second, the fences are there to prevent you, the gentle fan, from bombarding your not so favorite driver with the bomb of your choice. The fences are not high enough to prevent lobbing something over, much like young Army recruits are taught to lob grenades, but they are mostly high enough from allowing you, the bomb thrower, anything like accuracy, even from a seat way up high. If you can hit a moving target from row 120, then you should be in the Major Leagues, as far as I’m concerned. Forget Nascar, you’ve got an arm! For God’s sake, use it!

I know that a lot of fans in red inhabit the stands at Nascar races today. Red does not always mean Dale Jr. Most of the detailed pictures of beer cans bouncing off the 24 car on Sunday were blue, and looked suspiciously like Miller Lite. I doubt any good Dale Earnhardt Jr. fan in good standing would be caught with Miller Lite, much less throwing it at Jeff Gordon. Seriously, I doubt any Dale Earnhardt Jr. fan would buy Miller Lite just to throw at Jeff Gordon. It’s a thought though!

Dale Earnhardt’s birthday coincided with the Sunday race at Talladega. Dale would have been 56 on Sunday. I miss him a lot, and even if you weren’t a Dale Earnhardt fan, you probably miss him too, if you were ever a Nascar fan. It’s just not the same watching a race and not seeing that famous black 3 Chevrolet and that famous mustache and smile around a track like Talladega.

Even if Dale were still alive, I doubt that he would still be behind the wheel of that famous #3, but if Dale had lived, I wonder who would be? There’s no way of knowing, but I suspect that sooner or later, Dale Earnhardt Jr. will drive the 3 car. Whether it is a Richard Childress Racing car, or a Dale Earnhardt Inc. car, Dale Jr. will eventually be driving it.

Dale Earnhardt’s reaction to the goings on at places like Talladega today is impossible to know, but I imagine he would publicly denounce it, as his son has done, but privately he might me smiling about it. If nothing else, Dale Earnhardt loved a good scrap, at least on the track. Off the track, Dale Earnhardt was all business. He ruled empires, including not only his own racing organization, Dale Earnhardt Incorporated, but merchandising businesses as well. Dale was one of the first, if not the first driver, to understand that more money could be made by selling racing memorabilia such as die cast cars, to tee shirts, hats, and anything else that could have his famous name printed on it. Today, virtually all drivers make more money from their online stores and souvenir trailers than they do in race winnings. Dale Earnhardt was the pioneer who began that trend that grows every year.

Talladega is a unique place in the universe, at least on race weekends. The huge 2.66 mile track allows for a lot of spectators, especially in the biggest infield in all of stock car racing. To visit this track is to feel like one is looking across something like a huge airport. I was there in 2004, and sat in the turn 1 stands. You could barely see the backstretch from where I sat, and you could see almost nothing of turns 3 and 4. Even with front row seats, I was still better than a mile away from other side of the track. I was never in the infield, but you could see a vast sea of campers and tents stretched out almost as far as the eye can see. A lot drinking happens when folks from all over the country descend on this tiny town in Eastern Alabama in the spring and fall of each year. Most fans stay the entire weekend. By Sunday, some of these people, but certainly not all, have been drinking for 48 or even 72 hours. A lot of these people aren’t just residents of Alabama, they are literally from every state, and even quite a few provinces of Canada. The party atmosphere is there, indeed, it might be the world’s biggest party held on a single site.

Even if every single member of Alabama’s law enforcement community were brought in to patrol the race, there would still be some ugliness. You simply cannot have hundreds of thousands of people at a single event and not expect some. For the record, 14 people were arrested after the race. There is one famous picture, not being circulated all over the internet showing a fan in a cowboy hat and what appears to be a Lowes smock, with the 48 of Jimmie Johnson, who’s car is partially owned by Jeff Gordon, being led away in handcuffs. Obviously, there were more than 14 people at fault, and all have been banned from buying tickets at Talladega for life, which is a joke within itself, but I’ll save that for another story.

Nascar fans, our sport is largely self policing. The teams police each other in the garage during race weekends. The drivers don’t get away with much on the track, because someone will usually put them either back in line or into the wall if they don’t behave. We, as fans must police ourselves as well. If you see a fan hurl anything at a race car, tell the nearest security person. Do us all a favor and help clean out the 0.1% of so-called ‘fans’ that make all the rest of us look bad. Nascar doesn’t need these people, and neither do we. Don’t let the actions of a few make us all look like fools.